I concluded my undergraduate computer science thesis on generating fractal music by postulating that “Western sounding” music would require the generator to impose a lot of predefined conventions on the musical structure.  My program wasn’t really making very musical music, in other words.  It was interesting enough, though:

Recursive string rewriting or L-Systems.
I noted that music written by humans oftentimes contains fractal structures within it, such as the beginning of Beethoven’s first Ecossaise, with successive bifurcations indicated: 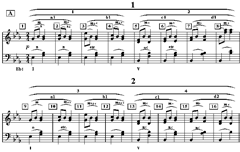 (This structure is similar to the ABACABA song).
Daniel Levitin has spent some time researching fractal structures in existing music.  His recent work, involving the digital analysis of hundreds of scores, reveals fractals buried in the rhythmic signatures of history’s composers: