Recently this was posted in an email group:

A former student has e-mailed me that his current teacher marked wrong his interpretation that the origin is NOT located in any Quadrant.  This teacher told him that the origin is in all Quadrants.
I'd love to hear some of your takes on this.  I've pretty much tell my students that points in the coordinate plane can be classified in 7 positions - one of the quadrants, on an x- or y-axis, or at the origin. 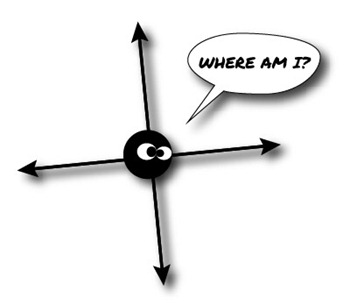 I knew when my hackles raised that I should hold off on responding, but luckily Illinois teacher Paul Karafiol did the job for me:

On the pedantic side, "in" a quadrant means in the interior, which would clearly exclude the axes under the standard (metric/topological) definition of interior.  Whether we decide that those axes are parts of the quadrants (though not the interior) or are "special" is a different matter.  I could imagine this making for an interesting class discussion that would touch on big mathematical themes:  why we try to avoid making arbitrary distinctions (a reason for calling the axes special, rather than assigning them to quadrants), the importance of precise definitions, etc.  What I can't imagine is this making for a good reason to take a point off a test, especially in the absence of such a discussion.  What well-defined learning objective is it related to?  Why is this an important part of what students should know or be expected to do?  Why take this opportunity to reinforce kids' basic idea that math is about learning a set of arbitrary rules, especially when--as might have happened here--"learning" is really code for "divining by esp, ornithromancy, or whatever"?  (I'm not even raising--except in this parenthetical--the whole idea of "losing points" versus raising points, or the really awesome article I just read about other "toxic" grading practices:  http://www.ascd.org/publications/educational-leadership/feb08/vol65/num05/Effective-Grading-Practices.aspx)

Incidentally, the original teacher in this story may want to check out Paul’s diatribe on another stupid grading practice.